S.H.E. Nation Rise in Love songs Support Humanities Evolution (S.H.E.) Soothing yet groovy, a cauldron of sonic delights & powerful intentions.
Buy Album for £7.99 as a download and listen to a couple of track

Victoria Whelan – creator and holds the vision yet is joined with other like-hearted women to perform the songs live, all holding a strong prayer and intention for the world they want. Rise in Love is her first album in 10 yrs (single mum absence) speaks to the heart of all that she loves. For updates Like on Facebook

Performing live with other women, workshops and choirs or with a gorgeous video backing of stunning images. Book now

What people are saying:

“Was given the CD in the UK over a month ago and listened to it the first time driving through the Arizona desert at night. It was so awesome!!!! Will definitely use these cuts in my events and tell folks about it. Thank you” Bob Desert Nichols, ISTA

“This album is a divine masterpiece! It’s a living prayer that penetrates right into your cells. Love love love!! Put this one on repeat” Catherine Keely, Emmett Technique Practitioner

“This is a divinely delicious album. When you need some ‘you’ time, I cannot recommend dancing and singing along with Victoria’s songs enough. The messages will inspire you to recognize your inner power, the power in surrender, and how to open to receive from the Earth and from the ever present love that surrounds us. In those moments when you are struggling, maybe the world seems a harsh place and you need support and deep nourishment from the feminine, this album will lift you up and give you the inspiration you need.” Akhilanda Ananda – Full Spectrum Living

“This Album, the lyrics and the sweet tunes sing to my soul. I have really enjoyed immersing myself in S.H.E NATION!!!”
Kim McPherson – The Well Nurse

“Absolutely in love with this album. The sounds, the lyrics, what it stands for. The songs beautifully build upon each other to a crescendo; finishing with some of my favourite songs that Victoria has produced so far. Rise in Love, True2u, Whats on your Altar and Deeply Receive are totally delicious tunes, that I can’t stop listening to.” Esther-Maria Lindner  – Aparaba Conscious Conception 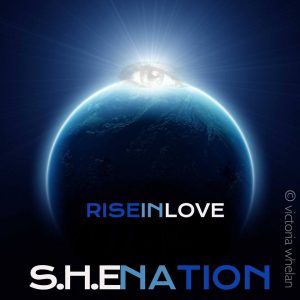 Victoria is also known as Joyaa or Sukha Sama. Her first album was back in Darwin in 1990 in a band that was half aboriginal – touring nationally with radio play called Under the Spell of the Trees. She also produced a series of images alongside this called Lust in the Forest.

Arriving in the UK in 1993 releasing albums as Joyaa (The Garden, The Softening, Wideawake & Dreaming, Into the Blue, and climate change album Too Late to Pray). She also had release as chillout act Aria Ma (star or music mother) alongside selling Lush Dresses for Goddesses. She was co-creator of Daughter of Gaia albums ( Spirit Visions, Rock the Goddess & Ancient Future). She also worked as a record producer and engineer during this time – co-producing over 30 albums, plus curated Womenspirit a multimedia show featuring 40 women all inspired by nature.